3 Ways to Get Involved in The Rice County DFL 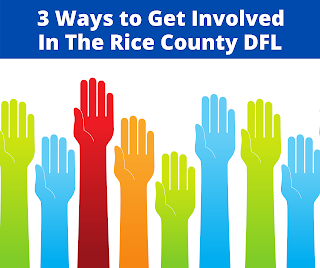 I first got involved in the Rice County DFL back in 2004. I attended my first precinct caucus, conventions, and meetings. At each event I learned how to get more involved and I did.
The Rice County DFL (Democratic Farmer Labor) Party is the organizing party unit within Rice County for the Minnesota Democratic Farmer Labor Party.
Our party unit is organized and ran by all volunteers. We work year round to organize, engage DFLers and support DFL candidates in Rice County. Our activities range the gambit from fundraising to registering voters.
There are numerous ways to get involved in the Rice County DFL and we welcome all involvement.
Here are 3 ways to get involved:
1. Attend our monthly meeting.
- Meetings take place normally on the third Thursday of each month at 6:30 PM and are held online
via Zoom.
- E-mail us if you'd like to attend:  ricecountydfl@outlook.com
2. Help organize your precinct.
- We have precinct leaders who are working on building teams and community in precincts.
- Help organize your precinct by joining a team!
- E-mail us for more information:  ricecountydfl@outlook.com
3. Sign up to receive our ACTION Newsletter.
- We send out our newsletter throughout the month with various opportunities to get involved.
- To sign up send us an e-mail:  ricecountydfl@outlook.com
We welcome all to be involved. Feel free to contact us with any thoughts, questions, or concerns. We'd love to hear from you. E-mail:  ricecountydfl@outlook.com
Shawn Groth
Chair, Rice County DFL
Posted by Rice County DFL (Democratic - Farmer - Labor) Party at 2:48 PM No comments:

The Week That Was

As I reflect on "The Week That Was", the words and feelings that come to mind are:  Community, Neighborly, Unity, Helpers, etc.

The above quote from Mr. Rogers is so fitting for "The Week That Was".

Our thoughts are with our friends and neighbors in Texas. Lives have been lost, people are struggling for bare necessities - it's truly a disaster. And the quote above came to life with what's happening in Texas.

It's easy to say "It's not my child, not my community, not my world, not my problem." This part of Mr. Rogers' quote was given life by Texas Senator Ted Cruz who fled the snowstorm and devastation with his family and literally left the country. Then when pressure was put on him - he came back early and blamed his children for his total disregard for those in his state who were struggling and dying.

And then there were "...those who see the need to respond." The "heroes".

There was Beto O'Rourke who organized volunteers to make more than 784,000 wellness calls to senior citizens and others around the state of Texas.

There was Alexandria Ocasio-Cortez who raised over $3 millions for Texans who are suffering.

"We hit $3.2 million in assistance for Texans across the state just last night," Ocasio-Cortez said at the Houston Food Bank Saturday morning. "I think this shows that New York stands with you, but the whole country stands with you."

But besides the "big names", there are regular folks who are stepping up to help as well.

Jim McIngvale, who goes by "Mattress Mack" is known to open his furniture stores to those in need. So when the snowstorm hit and many were left in the cold, hungry and needing water - he opened some of his showrooms and invited hundreds in for warmth, food, drink and a place where they could rest.

Locally, this past week - we've seen Mr. Rogers quote in action too.

Faribault Senator John Jasinski lived up to the "It's not my child, not my community, not my world, not my problem." part of Rogers' quote as he continued his campaign to divide Minnesotans by declaring that tax payers dollars shouldn't go to help Minneapolis and St. Paul recover from the riots of last Summer. He continued to pit rural Minnesotans vs. metro Minnesotans. And his supporters are joining him - here's a sampling of Facebook comments on Senator Jasinski's posts:

"They made the mess they need to clean it up! They elected to inept people that run the city."

"Oh hell no. They made their bed and now they have to sleep in it!"

"No bail out!!! They allowed it to go on, they can live with it"

Senator Jasinski is the definition of a total hypocrite.

When a tornado hit Faribault the State of Minnesota - all Minnesotans came to the aid of Faribault. And Senator Jasinski wasn't shy about asking for state funds to help in the recovery effort of Faribault and surrounding areas, as he should've.

I was in Faribault that night with our Central Committee holding our monthly meeting. We were less than a mile from where the tornado touched down. It was hard to see a community I love, support, and grew up in and around be savaged by the tornado.

It was great to see the outpouring from all Minnesotans and the State Government to help Faribault recover.

Now some will argue it was different because it was a natural disaster. Well, I would argue that the folks who were affected whether by the tornado or by the rioting - the innocent business owners, families and residents who were affected would see no different in their damage. They were all hurt by something that was out of their personal control.

We're in this together. No matter your political beliefs - when we see our neighbors needing help, we help them. Period. 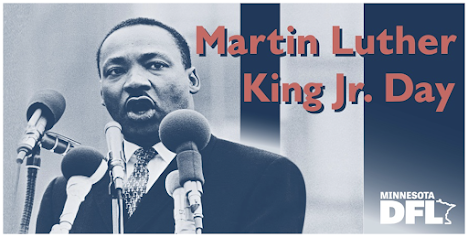 With Martin Luther King Jr. Day just around the corner, the Minnesota DFL is hosting a supply drive to help those in need! Dr. King’s work on economic justice had one main idea: that all people should have what they need to live.
Join us for a day of service and help contribute to Dr. King’s mission! All materials collected will go to St. Stephen’s Human Services and Simpson’s Housing Services. Both organizations work to house and support people experiencing homelessness. They all need our help to support participants in their programs and guests in their shelters!
Here’s what you need to know:
Time & Date: 9 a.m. to 1 p.m. on Monday, January 18, 2021
Location: MN DFL at 255 Plato Blvd., St. Paul, MN
Items needed: Full list and more information available here
To help protect folks from COVID-19, please wear a mask and practice social distancing when dropping off donations. We ask that you please stay home if you are experiencing any symptoms of COVID-19.
We can’t wait to see you there as we all support Dr. King’s vision, St. Stephen's Human Services and Simpson’s Housing Services!
Posted by Rice County DFL (Democratic - Farmer - Labor) Party at 4:39 PM No comments:

Join the Rice County DFL at our monthly meeting (Central Committee).
All DFLers are welcome to attend.When:
Thursday, July 9, 20206:30 p.m. - Meeting StartsWhere:
The meeting will be held virtually via Zoom (online).
Please e-mail us at:  ricecountydfl@outlook.com
To participate in the meeting.
Posted by Rice County DFL (Democratic - Farmer - Labor) Party at 4:34 PM No comments:

Well it's that time of the year. Lawn signs have begun popping up.

If you'd like any of the DFL (Democratic Party) Endorsed candidates' lawn signs - please fill out this request form:  https://forms.gle/igwmtkd9Q7Y3cPrq5

Lawn signs will be delivered as they become available.

Thank you in advance for supporting our local candidates!
Posted by Rice County DFL (Democratic - Farmer - Labor) Party at 2:22 PM No comments:

Precinct meeting at this location:

SUGGESTED DONATION:
$15.00 per person
$25.00 per couple
FREE - kids 12 and under
Everyone is welcome regardless of ability to pay.

Promote Your Page Too